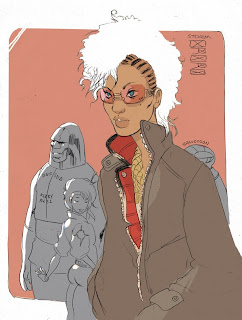 Ororo ro row your boat by ~royalboiler aka comicbook artist Brandon Graham (King City, Multiple Warhedz).
so Brandon dropped this on dA recently. it hit me like an ELE comet smashing the supercontinent. in his words "I have strong feelings on mohawk storm being the greatest advance in Marvel technology since the invention of Jack Kirby. If they had any self respect the cornrow/mohawk would be the next logical step." only crazy artist types even SPECULATE about marvel having any self-respect... 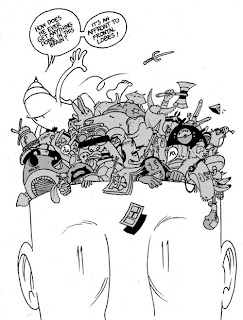 i took this as a personal challenge from Brandon to me about who can draw the better cornrowhawk Storm, so expect to see one soon... i think many X-men artists resent the fact that Storm is black, because they make NO attempt to reference any black fashion or hair styles when drawing her... but i digress... speaking of getting off the subject, here's another piece Brando drew recently (i think it will appear in an upcoming issue of King City), no extra charge, because he's got a great li'l drawing of KRS ONE in there... and i'm here to support shit like that...
holla!
-samax
ghettoManga.com
comics.hipHop.news.art.culture
edited by Samax @ 11:38 PM