the MAYHEM continues Before it even STARTS... 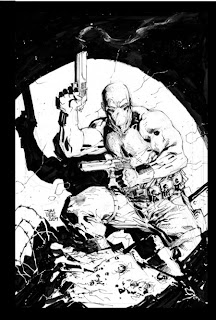 here's the roughs Jim Lee (yeah, that Jim Lee) did for the Trade cover to Tyrese Gibson's new comic MAYHEM! no, you didn't miss anything, the first issue to the series doesn't hit stores until August 5th. so now you're probably wondering why Jim Lee is drawing the cover to the Trade collecting a series whose first issue isn't out yet. as Martin said in Bad Boys: "gettin' it outta the way..." Last month, i predicted that MAYHEM! #1 would be the highest-selling comic of the summer, due to Tyrese's multi-media marketing push, and it looks like i may be right: 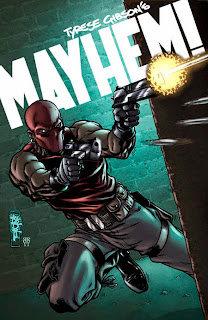 according to an Image Comics press release, Tyrese's presales through LA's Meltdown Comics have exceeded single-store records not seen since the early nineties with over ten thousand units sold... most comics today would enjoy selling 10k total, and that's what MAYHEM! has moved through one store, in one city, before the book's release.
"The success of MAYHEM is a golden opportunity for all retailers to tap into this new influx of readers,” says Meltdown owner Gaston Dominguez. “Tyrese is a 2.0 celebrity who is a marketing workhorse and whose brand spans across movies, music, and TV... Believe me when I tell you that if Tyrese Twitters your store name you will get calls and in-store orders.” dude isn't frontin' either... i was online when Tyrese put one of the local stores in my area on blast because one of his fans told him his comicshop owner never heard of MAYHEM... the next thing you know he is asking them to STOP calling because the store is getting overwhelmed!

but if you think other creators at Image are salty at Tyrese for making them step their game up, think again. "With the current state of the comic book industry, any new infusion of excitement or customers would be a welcome relief" said Image co-founder and President Todd McFarlane. "Tyrese brings both of those to the table along with his unbridled enthusiasm." in fact, several big names are on Tyrese's bandwagon.

“To have the personal endorsements of Jim Lee, Avi Arad, Todd McFarlane, Robert Kirkman, Grant Morrison, and so many others…it just blows my mind." said Gibson in a press release. "I am excited to bring MAYHEM to the die-hard comic book fans, but I am most excited at this opportunity to expose this world to the new generation of comic book fans, who, like me until now have never read a comic book in their lives. They will find new heroes to embrace and enjoy escapism at it’s best! This is only the beginning…”
watching Tyrese learn the comics biz on the fly (then turn around and share what he's learning on Twitter) is amazing. i mean, this dude learned about comics by attending Comicon to promote Transformers, now he Kingpinnin' it! from what i can tell, he's cooking up more comics properties behind the scenes with all those big-name comics vets he's rubbing elbows with... but first thing's first! Mayhem! #1 drops August 5th. tell your comic shop to order you an issue, if you haven't already...
holla!
-samax
ghettoManga.com
comics.hipHop.news.art.culture
edited by Samax @ 2:59 PM

As soon as I get my new card. I am definetly going to get a few copies. I support any and everything Tyrese does. He can not go wrong. I going to try to see if our BBY store can get some on the magazine racks that would be awesome.

Manga? Do you have to read it right to left? If not then that's not a manga XD lmao sorry to burst your bubble! Don't mean to be rude!

whatever dude.
who asked ya. i never said it was "manga"... it's ghettoManga. beat it kid, ya bother me...

I bought 100 copies!!!!! Support him to the fullest...He has inspiresd me to finish my book through his words of encouragement on SayNow.....Much Love

I am glad to see the evolution of a young black man determined to make big, achieve that and more keep reaching and stay humbled. Great job!

I can't wait for Mayhen to hit the scene. Tyrese is definitely breaking the stereotype for entertainers. God is blessing so keep doin ur thang! U have more supporters than haters.

Wow!!! That's all I have to say WOW!!! Congrats!!! U deserve it!! Ur a real humble person n this I know because of how u express ursefl on ur tweets... Thank u for all ur good advice n kind words I will definetly get my copy! This man is gonna make it even bigger!!!! Much love n support ty!!