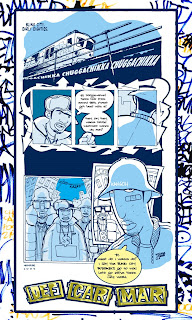 on the low, looks like my man Jamar Nicholas (Detective Boogaloo; Jamar Chronicles; Fist, Stick, Knife, Gun) is lookin' to unload some of his original art from his hilarious webcomic Detective Boogaloo: Hip Hop Cop. if you haven't had your eye on Jamar, you need to get familiar. dude has been beating up the comics underground for a minute, and has connections to just about every corner of this comicbook game. since he has pretty much bailed on the internet until 2010, i've been getting my Jamar fix via his email newsletter. you can sign up for that joint at Jamar's blog. 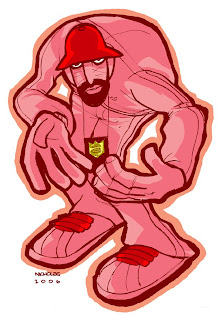 anyways, for those who haven't peeped the adventures of Detective Boogaloo and the Ill Crimes Unit, go ahead and check it out! three or four pages in, you'll be hooked on this hip hop flavored action comedy comic... which brings us back to the art sale! J-dot will be selling off the artwork on some first-come first serve ish, so get at him via email and tell 'im which page you want so you can get the jump on the scrubs not wise enough to be reading ghettoManga regularly! 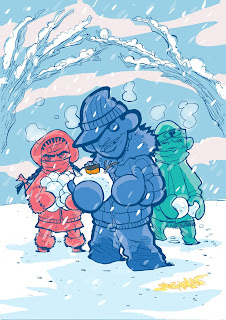 page #1 is $400 (i.e. he doesn't wanna sell that one that bad) but you can get any of the others he did for $150. and don't gimme none of that "recession" crap either... i see ya'll rocking them fly ass sneaks! this is ORIGINAL ART, people! once Jamar puts the word out on his grapevine, the page YOU want will be history. and with the moves my man is making, you'll see the majors pimpin' his work on Brother Voodoo or Bronze Tiger or something, then your comic shop will try to sell you the same page for double. be smart and get in where you fit! since he's clearly in a giving mood, saint Nicholas will pro'lly entertain your commission requests too, so reserve your spot ASAMFP, a'ight?!
holla!
-samax
ghettoManga.com
comics.hipHop.news.art.culture
edited by Samax @ 9:32 PM