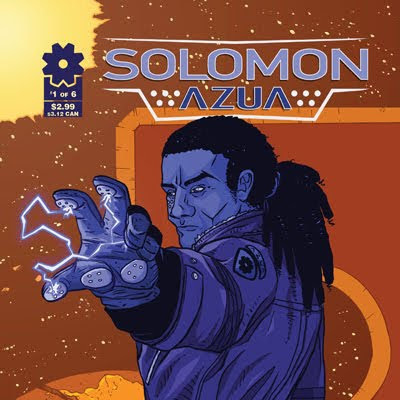 because no matter how Indy you get, you just rarely get to see a Sci-Fi movie starring a space-faring dread who also happens to be the galaxy's most reckless adventurer and Thief. But that's EXACTLY what you lucky bastiches are are in for when you get your paws on Solomon Azua #1, the first issue of a six part series by that dude Jake Ekiss from Space-Gun Studios here in Dallas. because he's cool like that, Jake sat down with me to discuss his favorite rude boy...
gM- I've been checking out the updates and preview artwork for Solomon Azua #1, and I've gotta say, I'm really looking forward to reading it. How did you come up with this character, and what inspired this particular slice of his story? 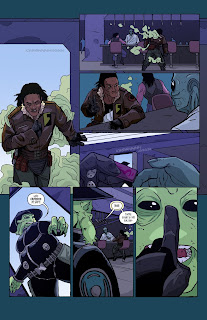 Sol's been roaming around in my head for a bit. He's really scratching an itch I've always had to do a rollicking space-opera type adventure story. For Solomon in particular, I wanted him to play that loveable rogue. It's a character we all love and secretly wish we could be. Strangely enough I can trace the earliest seeds of this idea back to hearing a live performance of the song "Pretty Thing" by Rod Piazza and the Mighty Fliers, a Blues/Jazz group of some note. The imagery I got in my head from that song was completely sci-fi for some reason, and though the scenes it inspired might not be in this book, the character it helped generate is.
This particular story is our intro to the world and characters. The first issue is a little heavy on the exposition (in fact, there's a scene where I outright let you know, "hey, this is exposition, it'll be over soon, I promise") but then we get to the adventure. The inspiration for this first story is just my love of cool spaceships. I can't get enough cool spaceships in my life, and I figured my hero couldn't either. He just takes it a step further and decides to lie, cheat and steal to get his. For this first story he's looking for one of the granddaddy's of them all, The Piston, a titan destroyer from an interstellar war some years back. The ship went missing and he thinks he's found it. He just needs (of course) a new ship to get to it.

gM- It's always good to see black protagonists, but we are conspicuously absent from science fiction stories (at least in movies). Was there a particular reason you chose to have Solomon be a person of color, or was it more of an afterthought? 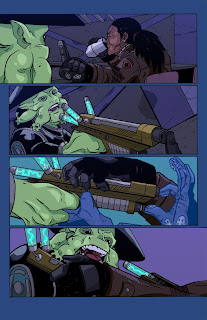 Solomon went through a lot of designs before hitting on the one I ended up with. I won't lie, initially he was white, and that came from strictly in the daydream phase of the project where essentially it's just me imagining how cool it would be to have those adventures myself. As time went on I actually had a conscious discussion with myself about it, and realized that the story I was telling didn't require a particular racial makeup for the character. I wasn't writing a white guy or a black guy (in fact I really loathe the notion that how you write a character should ever be predicated on their race) , I was writing a rogue. I mean, it's space, it's the future, technically my hero could be a floating jellyfish if I wanted. It only came down to what was good for the story. From there I decided I'd just start working with whatever ideas came to me that would fit that. Somewhere along that writer/artist journey I watched my copy of the fourth Aliens film and remembered how wicked I always thought Gary Dourdan was in it. So I started working from the character Christie as a base visually. That's where Sol gets the dreds and his race, so we can thank Gary for that one.
Over time Sol worked away from that as I didn't want to outright lift from my source. I loved the dreds as a visual element, they're fun to play with and I liked experimenting with how to draw them and different ways of representing them. Somehow in my drawings he developed a serious case of "hero face", that super strong chin. I just started drawing it one day and didn't want to get rid of. It helped also because he gets more and more angular when I draw him, and June, his cohort in the series, gets softer and rounder. They set each other off well.

gM- The whole book appears to have a ton of design (aliens, clothing, uniforms, architecture, spaceships), which is typical of sci-fi stories. How long have you been sitting on this story? Was the design work difficult, or does world-building come pretty naturally to you? 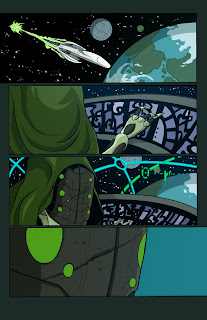 Oh man, the design work was brutal. I gave myself a number of challenges in this book that I didn't even think about until I started drawing page 1. The story and in some sense the designs were floating about in my head for a year, but all that had to get stepped up once it reached the page. Thankfully one of my hobbies as a kid was drawing spaceships and aliens, so a few of my older ideas got something of a polish and revamp and made it into this work. I'm hoping to spend a lot more time on my ships and such in later issues of this series, really flesh them out. There's a big reveal of a ship at the end of the book foreshadowed from early on in this issue that I'm already getting excited over.
I knew the first issue would be a lot of Sol and company romping around on a planet so it was more important to take care of the character design first. Sol had a lot of little elements that I wanted to work in. His jacket in particular relates to parts of his character history that will come up a little later in the series. June and Lab (the green alien with sea cucumbers on his face) each kind of represent different takes on sci-fi. Lab is the only character who never seems to take off his vacuum suit, and I kind of loved the idea of giving the black vinyl spacesuit not to the super hot girl, but to the ahh, let's say big boned, alien. June is all practicality. I wanted to work in Thai fisherman's pants for her at least in her intro, because really when we meet her she's being casual. She gets some cool wardrobe changes further down the line that I won't spoil though. We needed to meet her and have her be the least high toned so that her transformation later has a bigger impact. As for Fedderman, our mercenary bad guy from the first issue, he's a very direct nod to the pulp genre and films like Indiana Jones in particular. He had to look rugged and adventuresome, but in a totally old school kind of way. Granted, he's a crazy cyborg so y'know, how old school can he be? I think he's just a fan of the classics.

gM- Solomon Azua is set up as a 6 Issue series. Are you planning on doing more, or does Issue six wrap up all you have in mind for the character? 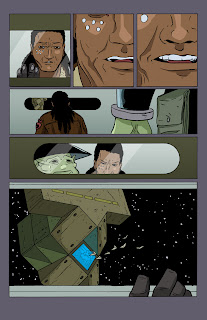 There's certainly more juice in Solomon than this first story. I've got little notes and ideas for him that could give at least another two stories, though nothing too concrete as of yet. I want to tell his story in the same style as old pulp serials. Each is basically an adventure to find some awesome treasure of the galaxy and throughout those adventures there's a larger story being told about Solomon and his character.

gM- Does Solomon's world fit into a larger continuity? Do you expect to spin off other characters in this "universe"?
Goodness, I hadn't thought much past Solomon himself. I suppose there's definitely room for spinoffs and such, though I haven't made any plans in that direction yet. I'm playing very fast and loose with the universe, it's very much not "hard sci-fi" so there's plenty of room for new discoveries as I write.
gM- What's next? How soon can people who buy this expect the next issue (you know comics readers... that's always the question!)? Are you diving straight into issue two, or should readers expect a lag time?

There'll be some lag time as I've got to see how my first issue sells and see if I can keep financing the same size print runs. Also there's the holidays to consider and the fact that other than the letters I'm doing everything for the book, pencils to color. So it takes a little more time than your average monthly. I'll hit the drawing board again in January and Issue two will debut in time for Staple! in March. By that time I should be into work on issue three, and we'll see how the schedule morphs from there. My plan, presuming all goes well is to release Solomon bi-monthly throughout 2010. Basically you'll get a new issue every time I appear at a convention (Staple, CAPE, Dallas Comic Con, and a couple of others). There's a few things that could change that schedule, but right now it's the best one I've got.
gM- What's the best way fans and retailers can get the grubby little hands on Solomon Azua#1? 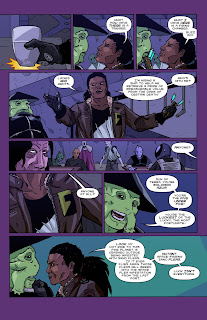 The easiest way for retailers would be to email me at jakeekiss[at]gmail.com. For fans there will be issues in most of the Dallas shops and a few others across the nation come Dec 30th. After Indy Comic Book Week is passes I'll be offering the book online through Comics Monkey and Indy Planet [UPDATE! To Order from IndyPlanet click here]. Of course I'll have copies at any convention I go to as well. Of the options for fans I might suggest conventions, as if you do that you may get a little something extra (hint hint).

that's what's up! thanks for the interview fam!

so, you heard 'im! if you're gonna be at any of the conventions here in Dallas, it's easy to run up on Jake and cop an issue (or more, depending on when you'll be in the house), and other people should harass your comic shop to contact Jake at the email address above and order , or hit him up yourself. but get your hands on Solomon Azua #1 by any means!
holla!
-samax
ghettoManga.com
comics.hipHop.news.culture

This story sounds way cool. Especially what he has in mind for the space ships. Can't wait.

word. that joint will be in stores all around Dallas(and select stores nation wide)December 30th.

I'll cop this as soon as it's up on Indy Planet.

Thanks for the love guys! I'll be sure to post links to the indy planet after the 30th