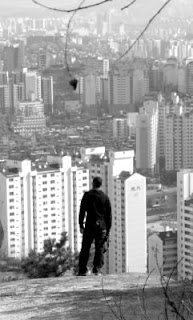 Award-winning cartoonist and animation hotshot LeSean Thomas (The Boondocks, Ben 10: Alien Force, Batman: the Brave and the Bold, Cannon Busters) is the subject of a new documentary about a brother living in Seoul, South Korea, and the step-by-step process of making an anime. peep the trailer below...


hardcore LeS fans on Facebook were straight geeking over this vid, which has the rumor mill buzzing that LeSean and his South Korean buddies are slaving away on a Cannon Busters anime, but so far Thomas hasn't confirmed the rumors that his long-awaited graphic novel is preemptively making the jump to animated form. anyways, Because no one asked me, the title of the documentary pro'lly WON'T be Seoul Brother #One. when will they learn?

yeah man I'd like to see how that turns out

you and me both.
This could actually end up being really awesome if done right.