My ode to the Beetles... 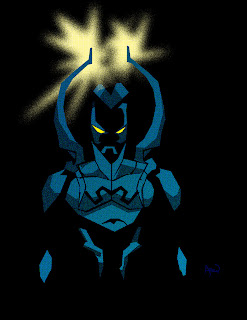 Blue Beetle III by Samax Amen
I drew this today as part of a Daily Sketch Challenge group I joined... It actually helps me to be productive to draw random things as fast as I can. The group posts a new subject everyday, and participants are allowed 15-30 minutes to draw it. Anyways, I actually really like all three incarnations of the Blue Beetle... that's unusual for legacy heroes. 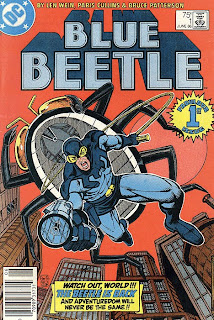 I actually liked Ted Kord even before he became a comedic buddy partner to Booster Gold in Giffen and Mcguire's Justice League (I liked Booster Gold back then too, by the way). Ted Kord was actually the inspiration for Alan Moore's Watchmen

character, Owlman, which may explain why people portray him as insecure and inept around more established heroes *shrug*. Blue Beetle art by Paris Cullins was very influential on me as a young comicbook artist and fan growing up.  In fact, Cullins was one of the artists whose work got me into books that I got out of once he was gone (my fave Cullins book: Blue Devil!).  Paris was on my short list of role model artists even before I found out he was black a couple years ago! 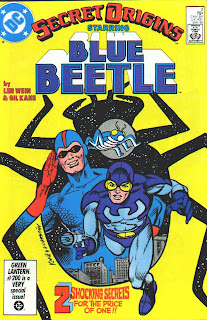 I also have this issue of Secret Origins -with the "original" Beetle Dan Garret's and Ted Kord's origins in one book- drawn by Gil Kane. that's pretty effing SWEET, in case you didn't know! Besides having one of the best names in comics, Gil Kane is one of my favorite old-school artists. He made lots of characters that were super-lame look awesome... he's single-handedly responsible for me liking the Atom and Hal Jordan... his depiction of the Blue Beetle lineage in this comic carried this mantle through tough times for me! 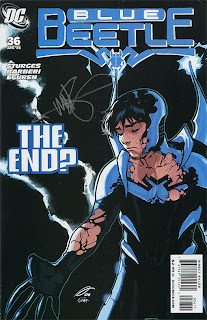 Finally, my drawing above is the tejano Blue Beetle

Jaime Reyes designed by Cully Hamner. great design! I really liked this book when I read the early issues, but it seemed like it would get canceled. To its credit, it lasted much much longer than I expected. I think the creative teams did a great job of creating an everyman hero. Many superheroes are given the 'everyman' tag, but I thought they really captured that spirit in Jaime.

I had fun on this drawing. It came out easy! Hope you like it... To see some more of my 30 minute (or so) sketches just click here.

The half-tone really works against the black background, especially on the shadows. And, as always, your use of negative space is fantastic.

thanks, guys!
I tried to have fun with it... this character's design lends itself to playing with negative space, which I love to do...