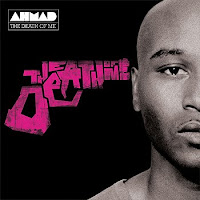 I've had my head down the last few days, working nonstop laying out the new GhettoManga Quarterly, so the 10th came and went without me checking for Ahmad's new record. Rappers push back their record releases so much, I never get out of my routine to get new records anymore... Anyways, The Death of Me is out, and not for nothin'... but uh... it's dope. I mean REALLY DOPE! Don't believe me? I got it streaming after the jump. Go ahead and cop a listen. I dare you...

I had already seen videos for few nice tracks (Get Some Money Go 2 Jail, Nig Can't Tell Me Nunt, I'ma Emcee) from it, so recommending it was a no-brainer, but I was putting together the new issue and wanted to include it in the BegBorrowSteal section, so I figured I should listen to it before putting words in PRINT, ya know?
Well, in case you need me to tell you, this record is fire. Ahmad is a nightmare. He's a battle-tested emcee who's also book smart, spiritually seasoned, and musically deep. The beats on this record are well-constructed and varied. Ahmad covers all the bases and manages to drop tracks for all sorts of rap listeners without anything that bores me. His rhyme cadence and delivery is melodic and mesmerizing, so that even if you don't listen to what he's saying, the songs have an intriguing, handsome sound. And anytime you do dig in, you will find Ahmad spitting rich, poetic lyrics that reward the repeat listen. The first time through, I forced myself NOT to repeat any tracks, and never felt the need to skip any either. Before I knew it, the record was over, and I was left stunned. 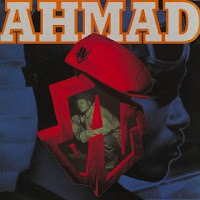 , and he was just a kid. He eventually went underground, recording with a band called 4th Avenue Jones and dropping lots of nice guest spots (please peep Mars Ill's track More when you get a minute). I said all that to say, I've watched dude grow up on the mic in a lotta ways. This record -the work of a grown ass man on a mission- is head and shoulders better than I expected. In this current age, where most of my favorite new tracks are remixes and mixtape tracks, it's good to see that making albums is not a lost art.  The Death of Me is the best album I've heard in a while.  I think you should click here to buy it. I will be writing, talking about and listening to this joint for a while. I hope some of y'all will join me.