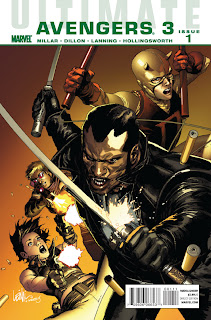 I'm not exactly sure why Marvel has such a hard time with Blade. Seems to me, all they need to do is make people watch the trio of films headlined by the Wu-tang-inspired Wesley Snipes (although that last one makes me dry heave, but I won't go there...) and copy what they see. Easy. Whatever the case, perhaps they will finally get it right THIS time, as they're taking another go at it with the 6 part story arc Blade Versus The Avengers over on Ultimate Avengers 3... but I'm not holding my breath.
The new joint has star power, at least. Mark Millar (Ultimates

) is back writing Ultimate Avengers this go 'round, and is joined by Steve Dillon (Preacher

, Supreme Power: Nighthawk) on art chores. I am personally not a huge Steve Dillon fan (but I REALLY dug that Nighthawk

trade he did with Daniel Way a while ago), and in the preview art, we see he has no intention of wowing me with his tattoo-less and fade-less interpretation of the Daywalker. That said, Millar has shown a penchant for wide-screen action, and Dillon for stomach-churning violence, so maybe the combination with Blade will be greater than the sum of its parts. anyways, here's the Sales Pitch and some pages, snatched from the jaws of CBR:
Blade is back in a bad way and that can only mean one thing: vampires are afoot! Somebody is leaving behind a bloody trail of bite marks and Blade’s stake-ready to take them on. Could the mysterious figure donned in an iron suit have something to do with it? And who exactly is the new figure leaping around down in a devil costume? As the Avengers get deeper into black ops, there’s no telling who’ll be thirsting for blood and who’ll be next on the menu! Bite into the next exhilarating series of ULTIMATE COMICS AVENGERS by superstar creators MARK MILLAR (CIVIL WAR, KICK-ASS) and STEVE DILLON (PUNISHERMAX)! 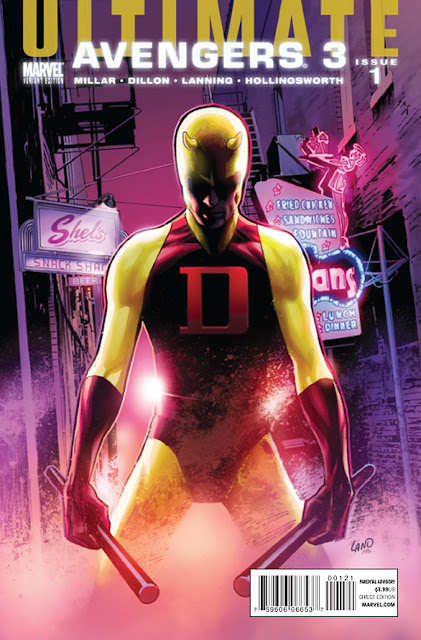 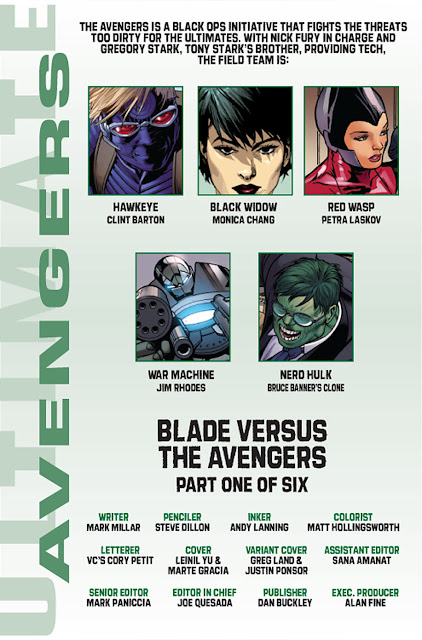 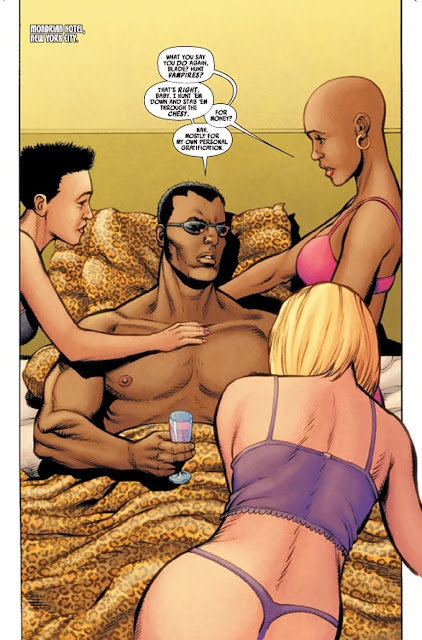 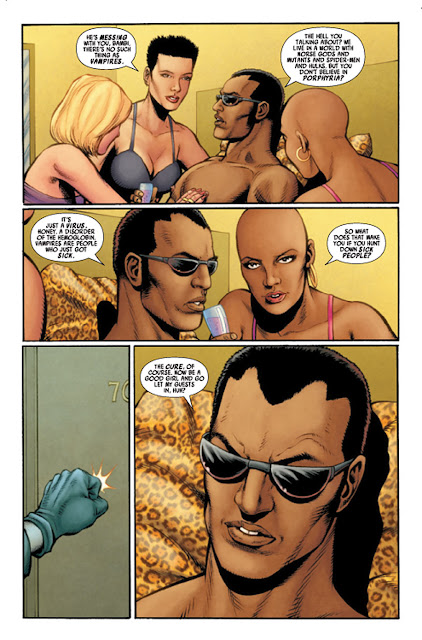 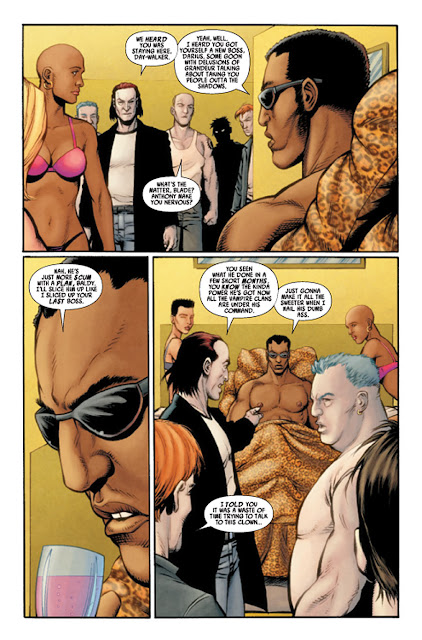 so yeah, we at least know that the ladies love this iteration of the vampire hunter... and that Millar is continuing the de-mystifying tradition that has followed Vampires in movies and comics for some time (which I'm also not a big fan of). At any rate, Ultimate Avengers 3 #1 hits stands next Wednesday, August 11th.

Really? I mean, are they serious with this?
Blade really wakes up with three chicks from three nationalities, like he was Black Dynamite, and I'm supposed to take him seriously as a vampire hunter with a dark past?

Not what I expected, but it seems that Millar wants to embrace the blaxploitation side of Blade...and let's be honest he was a little Blaxploitation when he came out. If it was anyone else I'd question it, but since it's Millar I'll give it a try.

AE- according to Millar, all superguys get unlimited poon.

Troy- yeah, that's definitely valid. Just about all Marvel's black superheroes have roots in the Blaxploitation film movement, from what I can tell. Mark Millar has a tendency to make all characters the same. That's probably why he gets along well in Hollywood. Sometimes it's awesome, and sometimes it's really annoying.
haven't made up my mind with this yet. Would still have preferred another artist, but we'll see...