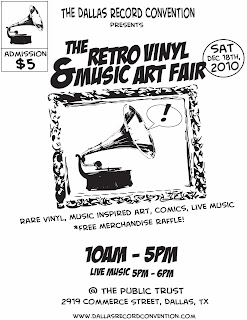 the fine folks of the Dallas Record Convention invited me to set up at the Retro Vinyl and Music Art Fair, which is today (Saturday Dec 18th) at the Public Trust in downtown Dallas. I've never been to one of these shows, so I really don't know what to expect, but I've heard from other friends that the shows they do are generally well-attended. I will be on hand with copies of the last few issues of GhettoManga Quarterly, and copies of the mixtape cover art I've done for MED and Bavu, as well as other music-inspired joints I've done. 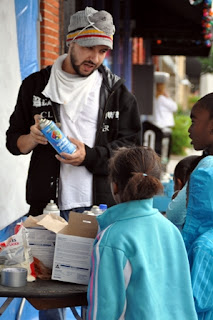 I was talking to my dude Isaac Davies (also known as IZK, a graf artist and musician here in Dallas) at a party recently about the decline in album cover art and packaging, in favor of photography and graphic design (usually of the shitty variety) and how (in my opinion) the music video had replaced the often very detailed and brilliant artwork we used to stare at while listening to our favorite albums growing up. It was interesting to talk about it out loud, since this is a subject I think about a lot but rarely discuss with anyone. So I'm looking forward to doing an art show where a large portion of the attendees will be album cover art enthusiasts. It will give me a good chance to get many people's various take on the subject! So if you're not doing anything today, drop by the Public Trust, which is at 2919 Commerce St in Dallas. We'll be there from 10a-5p.