Is Warner Brothers Playing to LOSE, or what? 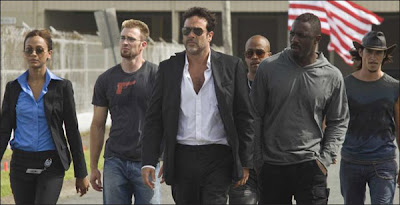 -turned-feature-film The Losers as I am... The studio inexplicably decided to push the movie back from its scheduled April 9 opening to open instead on June 4th. This was motivated (i guess) by their desire to push the Clash of the Titans debut to April, but now The Losers will open with a remake of the cartoon Marmaduke, one week before the remake of the eighties action show The A-Team.  I feel pretty comfortable saying that The Losers will be better than The A-Team, but I'm equally sure that "Eighties Nostalgia" beats "Under-the-radar Vertigo adaptation fever" in the movie version Rock-Paper-Scissors. movies get pushed back all the time, but this move makes NO sense to me. anyways, to share in my ♥ for all things Losers, click here.
holla!
samax.
ghettoManga.com
comics. hiphop. news. art. culture
edited by Samax @ 4:34 PM

Just need to say how tired I am of re-makes.

And as I typed that, I suddenly wondered why they don't sell special edition DVDs of comic book-based films that come with a TPB of said comic.

right! there is a great opportunity with all these comics adaptations to create new comics readers (believe it or not, that's one of the reasons i do this and other blogs), which are sorely needed.

Disney is very good at replenishing its fan base, so I'm hoping they bring some of that salesmenship to Marvel. If so, Warner will likely follow suit.

LOSERS Has been moved back to April 23rd!!!