Yeah, I'm featured in this book... so you KNOW it'll be good!

) have teamed up to produce an exhaustive 176 page book covering the expansive and diverse world of black comics.  Black Comix: African American Independent Comics, Art and Culture has an introduction by Keith Knight (The K Chronicles), and is so thorough, that I'M in it, along with Dawud Anyabwile (Brotherman), Arie Munroe (Mainasha) and more! 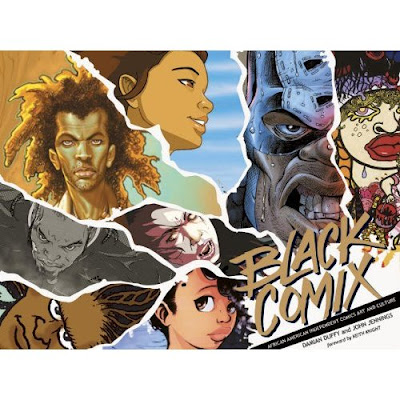 here's the Sales Pitch:
The immense popularity of comics and graphic novels cannot be ignored. But in light of the comics boom that has taken place over the past 10 years, the artists, writers and publishers that make up the vibrant African American independent comics community have remained relatively unknown – until now. Black Comix brings together an unprecedented collection of largely unheard of, and undeniably masterful, comics art while also framing the work of these men and women in a broader historical and cultural context.

With a foreword by Keith Knight and over 50 contributors, including Phonzie Davis, Jan-Michael Franklin, Frances Liddell, Kenjji Marshall, Lance Tooks, Rob Stull, Ashley A. Woods and many, more, the cross section of comics genres represented includes manga, superheroes, humor, history, science fiction and fantasy. This book is a must-have for comics readers.
Having talked to John Jennings on several occasions, i can tell you that these dudes are at LEAST as obsessed with the black comics underground as I am, and way more organized! my expectation is that the book is gonna be the BOMB! Black Comix: African American Independent Comics, Art and Culture

is scheduled to drop in the late spring, but you can click here to pre-order that joint right now

That is a solid line up.
Between you and Dawud Anyabwile-
I was already sold.

I have an old zine by Phonzie Davis
I'm glad to see more of that guys work.

and Rob Stull is a great artist. I might've typed at you on here before about how I used to show up at that dudes place and watch him ink Tellos pages.

word? nah, i didn't know that! Tellos is bonkers... yeah, I discovered phonzie's book left handed sophie and some zines and stuff in '08. looking forward to seeing more of his stuff.

like i said, nobody could cover ALL the black cartoonists in underground comics, but this book looks to be pretty thorough.

This is major homie! Congradulations!