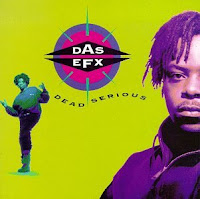 yeah, it's that kind of week! here's the video to the instant classic They Want Efx by brooklyn/jersey duo Das Efx. the first time i saw this on Yo!MTV RAPS I was totally hypnotized by the time it was over. The beat and style of the video perfectly complimented the lyrics and delivery of these crazy dreads who clearly watch too much teevee! These cats were discovered by EPMD in a college talent contest where they came in second, but got a record deal and a spot in the legendary crew, the Hit Squad (Das, EPMD, Redman, K-solo, Keith Murray). It's unfortunate that the schism between Eric and Parrish also split up the Hit Squad, depriving us of what would surely have been some of the best collabo records ever.
anyways, to peep Baknaffek and Wontu from their sophomore record Straight Up Sewaside, just click here.