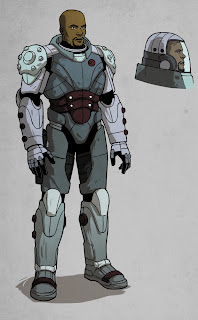 I got some new character designs for you from Cold Space, the upcoming Sci-Fi comic co-written by Sam L Jackson and Eric Calderon (Afro Samurai

). As you can see in this design by series artist Jeremy Rock, Sam L not only co-writes the comic, but also lends his famous face to the series' star and resident profiteering badass Mullberry! "Cold Space is simple because it’s just normal people trying to survive. It’s just the time and place that’s radically different,” Calderon explained in a recent interview.

“Mulberry is just a runaway criminal who doesn’t feel like getting taken in by the Galactic police and wants to keep making a buck so he can have some fun and have some cool stuff. When he crash lands on a ghetto space mining moon, he finds that the one small town that exists has two warring entrepreneurs and a third freelance scavenger gang on motorcycles. So, you can already imagine the pinball machine of this set-up making noise when a new hotshot comes into town.” 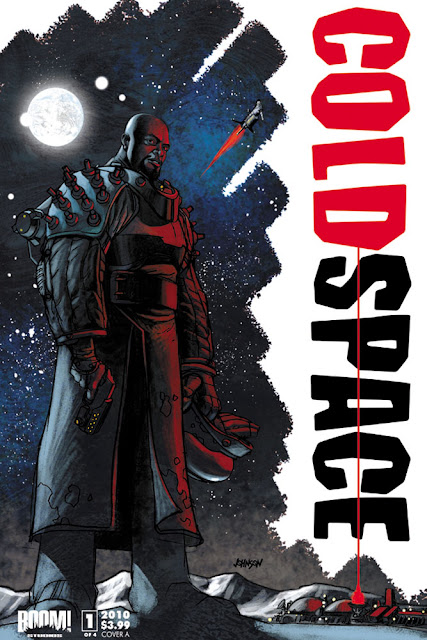 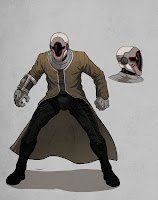 He had me at 'ghetto space mining moon'... but Calderon really endeared himself to me when he explained why he and Sam decided to do the series in comics rather than cartoons, television, or film. “... this was a chance to branch-out and hopefully not take years and years just to get off the ground."
It doesn't hurt that there's apparently a chick in fishnets with a cyborg hand, either. I have never been a huge fan of sci-fi comics, but it helps if you can ground some of the trippy space crap in good, old-fashioned humanity. Once I can feel the world you're giving me, then all the tech and weird creatures enhances it! Similar to the indy comic Solomon Azua I told you about, Cold Space looks like it has a main character I can relate to and a setting and storyline that will keep me engaged!  To read the Calderon's full interview on CBR, click here.
holla!
samax.
ghettoManga.com
comics. hiphop. news. art. culture
edited by Samax @ 2:28 PM