Robot 13: doing it extra BIG in the dime! 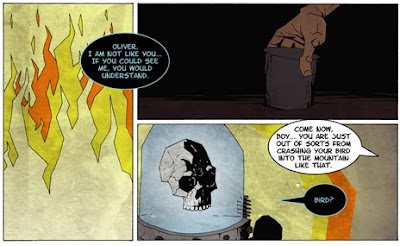 every year the wild world of Indy comics produces another "Little Engine That Could" story. If you've been reading Blacklist Studios' unpretentious monster-smashing epic Robot 13, you probably already know what I found out this week: This book is FREAKING AWESOME! but maybe I should back up a little bit... 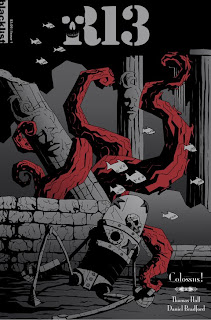 I remember seeing the cover to Robot 13#1 last summer and the more advance promotional art I saw, the more I wanted to buy it. I had assumed (due mostly to the sharp logo and polished, professional look of the cover art) that it was an Image book, until I spotted it on the Indy ComicBook Week blog.  Like so many of the comics i promised myself I was gonna buy, Robot 13 slipped through the cracks of my strained budget.
luckily for me (and you), 13's writer and promotional whirling dervish Thomas Hall sent me review copies of all three issues in anticipation of the release of Robot 13 #3 next month. As much as I wanted to read it, it's quite different than what I expected... it's better. 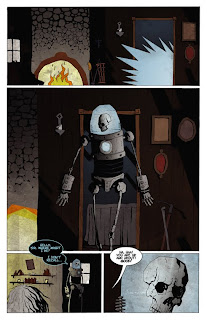 I would have been pretty happy with the book i expected to read: A knock-off of Mignola's iconic horror/adventure joint Hellboy spliced with recent "indy comic that could" success story Atomic Robo. What I actually got was an easily digested, well-written, and beautifully illustrated monster parade that is sad, funny, and mysterious all at once. Thomas Hall's writing does what I wish more comics-to-film adaptations would at least attempt: It takes its time. Hall isn't really in a rush to explain his hapless amnesiac star to us all at once. He gives the reader the opportunity to ask the important questions before he answers them. And he's smart enough to unleash his artist Daniel Bradford's desire to draw Robot13 in bloody combat with various mythical beasts. Bradford clearly takes pleasure in illustrating horrific violence in a way that adds little bits of comedy into this comic, and helps to enrich the story. 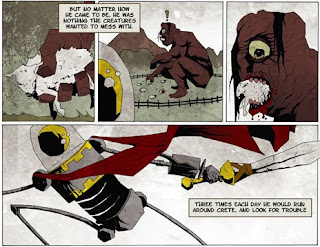 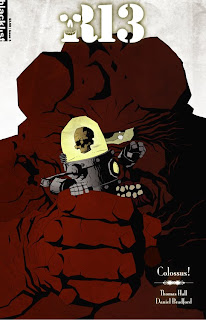 The third issue gives us a great look into Robot 13's mysterious origins, and wraps up the series' first story arc. Those would be good enough reasons to cop the issue, even if it didn't also feature the best fight scene so far. Robot 13 has the sense of tragedy and loneliness that Hellboy and Atomic Robo lack, but occasional moments of whimsy in both the story and art help lighten the experience of reading this book. Of course, as we learn about 13's past, the recurring appearance of the murderous monster mom whose spawn he keeps fighting (and killing) suggests that the future will have plenty of tragedy to go around for the Man of Bronze as well! 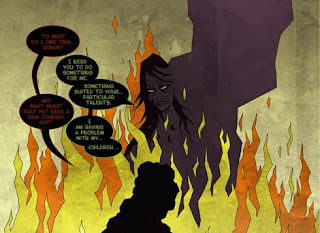 So, like I said... this book is FREAKING AWESOME! Robot 13 #3 is available for preorder at your local comicshop right now, and will arrive in stores March 10th.

word! I need to check that joint out, too!

Man, you have got to stop letting us know about all these sweet comics. Do you think I'm made of money or something?

just 'borrow' it from a friend!