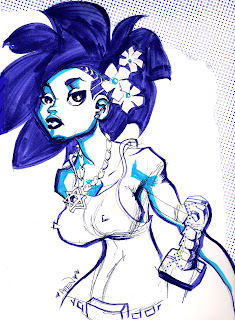 I drew this joint live at my table at the Underground art show Saturday using a ballpoint pen, sharpie, and watercolor brush pen on paper. I also added the zip-a-tone via photoshop filter, because that's how i roll right now... BIG thanks to all the fine folks who came out to the show and supported.  even if you didn't have the bread to buy anything at the show, thanks for checking us out. ghettoManga is a movement, and it's good to have you on board!  there was way too much going on at the show for me to report on by myself, but I can highlight a few things... 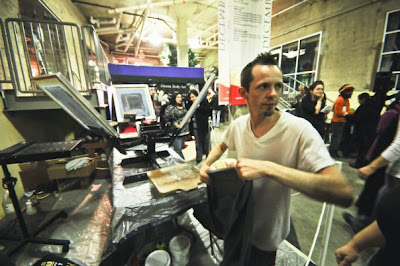 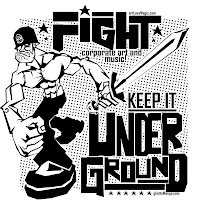 I hear a lotta people copped the limited Keep It Underground Teeshirts that my man Justin Nygren of Shirts Equals Awesome screen printed live at the show based on my design (if you ordered one last week, i gotchoo). Justo had several designs cued up to be printed to order EXCLUSIVELY at the show, and funneled the profits to help with relief efforts in Haiti. Justin is a little guy, but he's got more heart than that little dude from Captain Planet! plus he knows his way around a screen press! 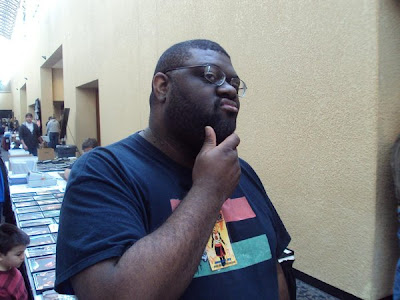 My man Corance (writer/co-creator of The Sparrow and Champion of Children, and 1/5th of the mighty GhostWerks crew) worked the wingman position while I was drawing. We had a good location in the big hall and survived the crowd that tried to crush us while the b-boys were doing their thing, because we're built to last! while he did not write it, Corance is currently starring in Spontaneous, the freestyle comic I'm drawing for my artbook series of the same name. The next volume will be out soon. If you want a preview of the comic and other stuff in the book, click here. 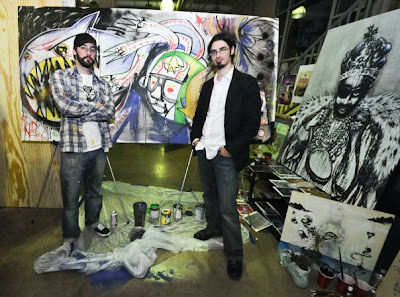 Despite crowd hazard, the spot was worth it 'cause it gave us a great view to watch ghettoManga Award winner/live art pioneer Jim Mahfood and ArtLoveMagic co-founder David Rodriguez collab on this ILL live art piece. for more about Jim Mahfood click here.

the mighty DJ Viz was on deck in our area putting on a clinic, spinning hip hop breaks and the original songs that classic rap joints were sampled from.  He was very humble about it, but he was giving several hundred people an education, myself included! anyways, all that added up to a dope experience for me and a ton of other folks... like I said at the show, I welcome feedback from any of the new fans out there (and you old-timers, too!)
holla!
-samax
ghettoManga.com
comics.hipHop.news.art.culture
edited by Samax @ 8:28 PM

The show was dope and it was great to have you in it. In fact, it's been wonderful to see your progression over the last few years at live appearances. I point you out to other artists as an example of someone who's got a variety of product for sale at a variety of prices, and always has great interactions with the fans. I've seen you maximize many different spots and situations at shows (like how we can't give everyone the ideal physical spot everytime, but that you always seem to find a way to make it work).

Carry on, bro. Many bright futures ahead.

thanks! I consider it a privilege every time i'm invited to participate. I know if i do it right, it can help me, and also help the show be a better experience overall for everyone!