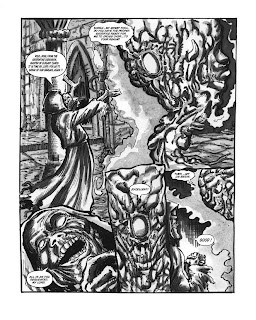 I like anthologies. In the same way that a hip hop mixtape from a deejay you trust can turn you on to your next favorite emcee, a good anthology gives you a taste of several different worlds and concepts, any of which may really spark your imagination. Winston Blakely constructed his new anthology Immortal Fantasy Vol 1

around his obvious love for the much-neglected fantasy genre. 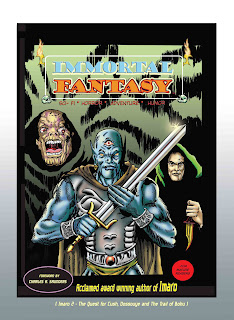 here's the Sales Pitch:
Prepare to enter the world of Immortal Fantasy. Kotas,the Dragon Lord in two amazing adventures,Pozitron, the techno-cosmic warrior as well as : Blood and Scapegoats, A Junkie's Delight, The Secret Wonderland of D.H.Fudley and bonus Sword and Sorcery tale " The Jar" starring The White Raven. Introduction by Charles R. Saunders,acclaimed award winning author of Imaro ( Dossouye, Imaro,The Quest for Cush and The Trail of Bohu. ) and an afterword by : Jemir Johnson ( 5 shots) winner of the 2008 Younity Guild of America award.
I already knew what to expect from Blakely's work, after reviewing his previous graphic novel Little Miss Strange last April (you can read that review here).The tales that take up much of this book are very much in the same vein, but he still managed to surprise me a little. 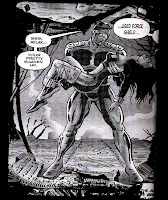 space opera. He is a champion of order who stands alone against the forces of an evil empire... well, almost alone... Blakely makes sure Pozitron has a fly honey Sh'tange at his side and a tricked-out space ship to make the cipher complete. If you need to have space technology and cosmic entities explained to you, you won't like Pozitron, because Blakely clearly enjoys throwing new concepts into the mix at warp speeds. 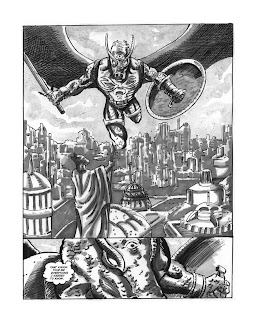 A couple adventures of Kotas The Dragon are featured prominently as well. Kotas is king of a race of people who share his ability to shapeshift into reptiles possessing dragonlike ass-kicking powers. And Kotas in particular isn't scared to use them! While Kotas is depicted as a fairly noble dude and benevolent ruler, he isn't above killing folks who get on his bad side, as the villains in these stories will attest. I was reminded of Etrigan the Demon

while reading the Kotas' tales, and that's a compliment! The real treats for me though, come in the stories that take place in a more contemporary setting. A Junkie's Delight is essentially a cautionary tale about the dangers of drugs and cheap sex with  a supernatural twist. In Blood and Scapegoats, Blakely thumbs his nose at Fredric Wertham's Seduction of the Innocent

and others caught up in the hysteria of blaming art for the decline of morals in America. My favorite story in the book is The Secret Wonderland of DH Finkley about a man who escapes to a world where his typical male fantasies are as real as the dull family life he leaves behind. 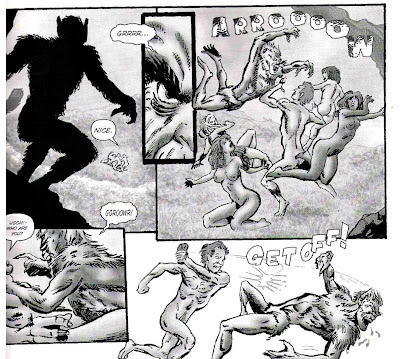 Where the storytelling mechanics sometimes get slightly out of Blakely's control in some stories, we see in these stories (especially in Secret Wonderland) smoother panel transitions and more deliberate composition. Maybe it's the excitement of totally alien worlds that influenced the more chaotic storytelling of the prior comics, or just Blakely's natural growth as an artist showing through on the later stories.
whatever the case, I think those that enjoyed Little Miss Strange will like this one too. Blakely continues to grow as a writer and artist, whose work (like most indie comics creators) is flawed, but passable. In Immortal Fantasy he does a good job of creating tales that inhabit the world of gray in between 'good' and 'evil'. The characters, even in one-off shorts, seem like they stick with you, and present more questions than answers. if this seems like your kinda party, cop this book on Amazon. just click here

to buy it.
to peep more of my Amazon.com reviews, click here

If GHETTO is the residential area reserved for the criminal and low class, why are you pro-Ghetto? Those of us from the old school had a better, more profound word that celebrated our blackness, it was SOUL. Seem like SOUL MANGA is much more positive than Ghetto manga, although I see you support comics that promote criminal and low-class activities.

Not everyone in the ghetto is criminal and low class, but I see where you're coming from... I really do. If you want to start a website called Soul Manga, let me know, and I will happily check it out.

You're not the first person to feel like they had to insult or talk down to me or what I write about, talk about, 'promote', etc. The internet is full of people who sling insults all day, and I have lost the capacity to take any of them seriously.

I will pretend you made any effort to know what I 'promote' (let alone to know me) and just say that if you don't like it or me, feel free to go away and (more importantly) to support something you DO like.

Feel free to search all the websites with "Soul" or "Urban" in the name and support them, if that's more to your taste.

check out the Black Superhero Museum

The Black Age of Comics

Google them. Support them. Tell a friend. There really is a lot of stuff out there you would like. Spend your precious time supporting that. I like myself and what I do enough that I'm not gonna be swayed by your arguments which, frankly, I have heard a million times before. Arguing with me is a waste of your time.

If you do decide to waste your time returning anyways, I will certainly be here.
holla!
-samax