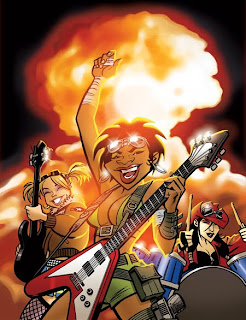 There is a growing trend in indie comics for what I call "band comics"... for the most part, they take another genre or two (superhero comics, fight comics, romantic comedy, etc) and throw in a band as their protagonists. Enter The Apocalipstix

, Seaguy, Batman and Robin) about a girl band so righteous they survived mutual assured destruction!... 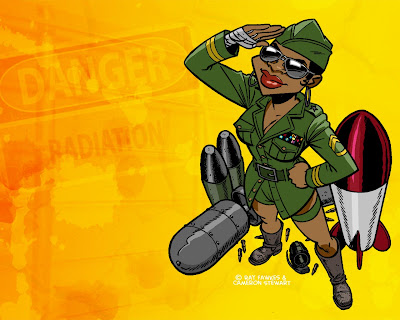 The Apocalipstix is the band formerly known as Mandy and the Mittens, composed of the tough-as-nails axe-handler Mandy, prototypical blonde bombshell Dot on bass, and Japanese gunslinger Megumi on the drumkit. In addition to roaming the blasted wasteland, scrounging for gas and food and just generally surviving the game, the Apocalipstix also maintain their commitment to rocking hard. They didn't let anything as minor as global thermonuclear war stop their rise to the top, either... as evidenced by the throngs of post-apocalyptic groupies they find themselves wading though in their quest for... whatever. 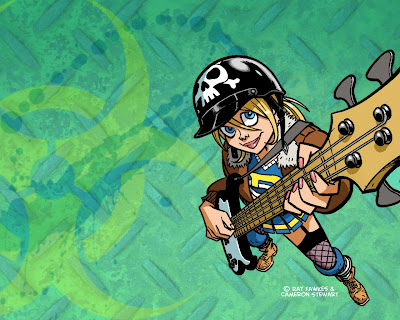 This comic is a lot of fun. Fawkes' script skips through all the boring parts and pretty much hits all the high notes. It reads like it was written "Marvel-style" with the intent of just giving Stewart the opportunity to draw a bunch of moments he asked for like Mandy wrestling giant ants or Dot shredding so hard her guitar explodes. Stewart flawlessly executes a loose cartoon style here, reminiscent of Jamie Hewlett or Bruce Timm. his figures are bouncy and fresh, and he handles detail work on vehicles, weapons and (or course) musical instruments like a seasoned vet! 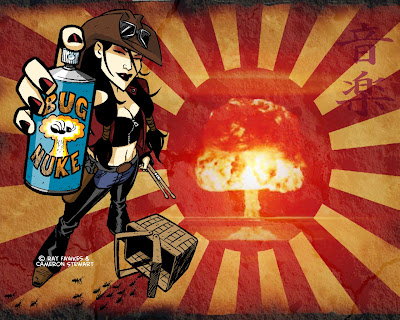 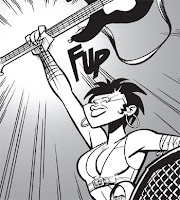 When I first saw the ads for this book when it dropped in 2008, I wasn't sure I cared for the exaggerated caricature design of Mandy, but after reading the first chapter, I'm ready to join her street team! Mandy is a perfect depiction of her character: she's no-nonsense, no apologies, and hardcore as they come. Even when she is confronted by the only thing she fears, she fights the power and makes it look easy.  She reminds me of the anti-pretentious female rappers I grew up on, before they started bringing out the rapping strippers that the kids bop to now...
anyways, The Apocalipstix

is a good read. It's not Shakespearean and doesn't try to be, it's just a good, fun comic in a small, but thriving little genre. for a preview, you can go here, and download a 50 page pdf! If your local bookstore or comic shop doesn't have it, cop it on Amazon