A Convicted Felon near the Kids?

"I thought about asking a guy who snorted cocaine and got arrested for DUI when he was 30 to come and speak to our kids, but President George W. Bush was not available."
- Dr. Terry Oatts, Principal of Woodland Middle School in Henry County, GA. 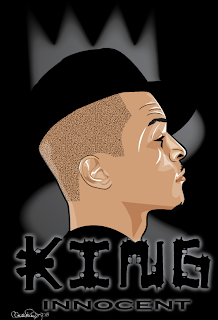 artwork by Chanson Presley
So for those who care, T.I. is out of jail and doing community service. He decided to show up at Woodland Oats Middle School and address a student assembly to tell kids to take their education seriously, stay out of trouble, etc. Predictably, at least one parent went batshit over the idea of a convicted felon being allowed near his kid, stating it would be more appropriate for T.I. to "mow the grass or pick up the trash around the school grounds" if he wanted to show kids that what he did was wrong. The Principal responded with the LOL material up top (among other things).
Good times...
anyways, I could go on, but read the article on the incident here. what do y'all think?
edited by Samax @ 2:04 PM

Honestly I think the only thing he may be sorry about is getting caught.

I don't know how I feel about parading celebrities who made mistakes in front of children. I think they're sending kids a double-message. After all, we talking about rubber-band man who was arrested several times as a teen.

I think its a little disingenuous for certain peoples with really checkered passes to preach about responsibility and education. Hmmm . . . do I see Kanye West promoting staying in school? I don't know.

Well for the most part, kids are much smarter than we think and can read between the lines and make the decision for themselves if someone is genuine or a fake.

another thing to consider is the fact that he could be doing it purely as a publicity stunt. middle school kids probably account for a large chunk of mp3 purchases and TRL callers (is TRL still on? you see how cool I am...)

As a parent, I would probably not mind myself, but I would also want to KNOW about it.

I could easily think of 100 rappers, singers, and celebrities I wouldn't want coming to my daughter's school, felony or no felony!