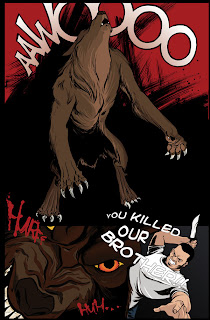 Guts. Blood. Dismemberment. Entrails. Screaming. Tragedy. Death. If any of these words offend you... for God's sake, DON'T READ Josh Boulet's The Wrong Night in Texas, because it will only ruin your day! On the other hand, if you have been waiting on someone to drop a b.s. free werewolf tale that beats you down and doesn't run afterwords, you might wanna check this out... 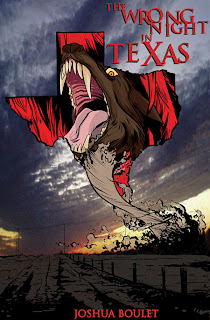 I've known Josh Boulet for years, and all the comics I've read by him (like his laugh-out-loud hilarious stoner comic The Green Reefer) did NOTHING to prepare me for The Wrong Night in Texas! The book, which is written, drawn, colored, and printed by Josh, clocks in at 115 pages. Boulet uses the space well, developing the characters sufficiently so that when the killing starts, you feel every muscle tearing and bone breaking.
The story takes place in a small Texas town, and the drama, romance and comedy between the characters has an almost biographical authenticity. If the characters in the book are based on real people, I just hope they don't read it... the grisly nature of the violence in the book is probably even more disturbing if one of the faces you see getting ripped off is your own...

As horror stories go, Wrong Night is relentless. Once Boulet turns the beast loose on these unsuspecting townies, he doesn't let up. Boulet makes no visible attempt to be clever or cute with the story, but he doesn't telegraph it either. you never SEE things coming, you just HOPE they aren't coming, but sometimes, they just are, and there's nothing you can do about it. Controlling that trick, and creating characters whose deaths matter to me as a reader, is a lot easier said than done. In Wrong Night, Josh Boulet manages to craft a classic horror story that is both heartbreaking and satisfying. so yeah, The Wrong Night in Texas is dope! if you need more dread and smell of wet dog in your life, COP IT! just click here.

Did you already hype this, or did I read it on some other blog? Looks, cool, though.

I mentioned it when the book first came out (and linked to the free online preview), but this is my first time being able to review it after actually reading it myself.

I was lucky enough to get to read this one pre-release. It's great, really hits hard. Nice to see true, hardcore horror in a graphic novel. Actually had a scene that made me shudder.

yes. this is one of the strengths i see in indie comics, potentially... because they need not pass a group of editors to see print!

it was a great surprise from a creator i already respect a lot!