I Finally Watched the "Hulk Vs" Joint... 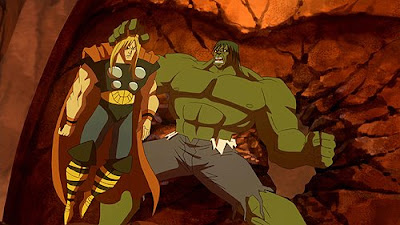 I watched the Hulk Vs joint at my man Khalid's crib. For some reason, I wasn't all that interested in watching it when it came out last year (despite all the fanfare), but blessed with a few hours to burn yesterday, I decided to give the jolly green giant a spin, once Khalid mentioned that he had this on tap... 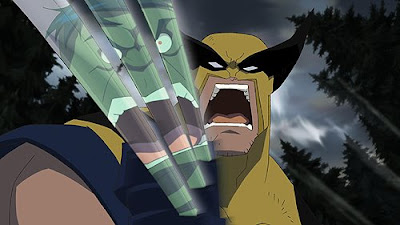 is actually two separate animated movies, about 35-40 minutes each, pitting the Hulk against the thunder god Thor and the mutant Wolverine. The flimsy but earnest circumstances that set up the heroes' conflict with the Hulk in both stories reminded me of the episodic one-off stories that got me hooked on comics as a child. They are not ambitious or pretentious. If you need to know more about the characters than what can be said in a few sentences, this movie will only frustrate you. 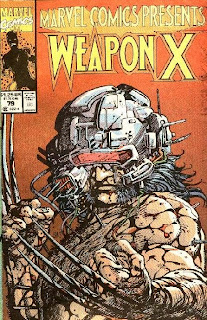 I liked both stories, but the one starring Wolverine was executed a little bit better. It was nice and violent, and did a great job of acknowledging Wolverine's history including a nod to Herb Trimpe's original yellow and blue uniform and Barry Windsor-Smith's classic Weapon X

story.  There were great cartoon versions of Sabertooth, Deadpool, Lady Deathstrike and Omega Red... and yeah, Hulk was in it, too.

I was pleasantly surprised with how much they were able to fit comfortably into the Wolverine story. The Thor story tried to do the same thing but was a lot more awkward. I thought both stories had a great sense of history without being bogged down by it. A nice blend of silver age writing style and modern age animation and action (rated pg-13 for violence, including Wolverine drawing blood repeatedly). You can read more of my reviews on Amazon

the Hulk v Wolverine was my fave...as you said the history lesson (via Weapon X) was much appreciated too....good stuff

I really enjoyed the way they handled Deadpool. This cartoon was better than the Wolverine movie!

So are you telling me I need to add this to the collection?

I dunno...I preferred the Thor story more. It was a bit more plot driven and Thor put a bit more a fight. Wolverine had slightly better animation though. Good review.

@Troy- that's totally valid. I'm a huge Thor fan, so I spent a lotta time nit-picking the depiction of Thor and the fight between Thor and Hulk. They have fought in comics often enough that I pretty much blame the writer anytime Hulk beats Thor. With so many powers, it doesn't make sense for him to play around with Hulk.

but I liked both. They combined the silver-age sensibility with modern style very well. Hope to see more of this!

I don't know, I just cant dig that animation style. It's become a schitck to me: If it's a super-hero cartoon, it looks like this. Why can't they bite the bullet and be inventive and groundbreaking like Batman TAS was in the beginning?

In a related note, Darren Rawlings has been doing a number of "Hulk Vs." illustrations lately. It all started with The Hulk beating up Mr. Fantastic

@arkonbey- i don't totally disagree with what you're saying, but i think "shtick" may be a little unfair. I think they are trying to give people what they want with this dvd, and are more or less successful.

If innovation was easy, it would happen every day. Lots of people try to do 'new and different' and just end up with 'wack'. Batman TAS was brilliant, but expecting that kind of trend was WAY above the bar when it came out. we can't expect that every time, unless we just want to be constantly disappointed with everything.

That said, I wasn't all that fired up to see this when it came out, probably because of the feeling you're describing.

@arkonbey OH YEAH! also, those Hulk vs Illustrations are priceless! my fave is probably the Hulk Vs X-men!

or maaaaybe the one where he knocked out Galactus' tooth! lol!
http://2.bp.blogspot.com/_xQ0zS3Vjlfk/S5_835Bxq-I/AAAAAAAAB74/oiMqylzuNpI/s1600-h/MarchMadness_07.jpg

I like how he uses the zip-a-tone filter on his colors! makes it look more vintage!

I can say that Planet Hulk was kinda "eh". Best part about it was Beta Ray Bill.

@Steelo - like Arkonbey implied, it wasn't innovative, but I thought it was entertaining. reminded me of the comics i read as a kid.