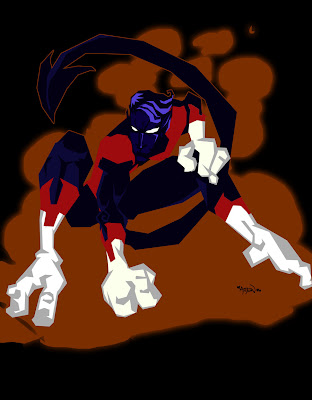 Here's a drawing I did of Nightcrawler of the X-men. I was getting jammed up on a piece I was doing, and did this to loosen up. cranked this out in 90 minutes...
My first exposure to the this character was in a reprint of Giant Size X-men #1 that was in a box of comics I was given by a neighbor who was moving away. Besides having the first black superhero I ever saw on the team (Storm, for the record), the comic also featured this German mutant  ninja elf teleporter! The magnificent Kurt Wagner instantly became my favorite X-man, and X-men became my second favorite comic (Spidey was still the king...). Nightcrawler (a devout religious man who looked like a demon) exemplified the "don't judge a book by its cover" message of the X-men books that helped shape my childhood.
(to peep more of my art click here)
edited by Samax @ 10:32 PM

You really captured the subtle color and shading of his skin. Seeing that makes me miss the old Alan Davis Excalibur.

but yeah, I'm glad you like the drawing. Alan Davis is awesome... I liked Carlos Pacheco's Nightcrawler as too. Actually, both those uys could draw any character and make them look awesome!