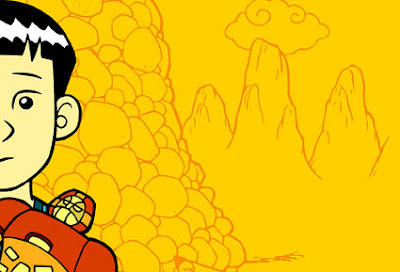 so for my birthday I treated myself to a trip to Half-Price Books and bought a bunch of cool stuff, which I will be reviewing because the whole list was freaking awesome!

by Gene Luen Yang. First of all, this paperback was beautifully designed and put together. As I was flipping through HPB's modest graphic novel selection, American Born Chinese

dang near leaped off the shelf at me, and once I opened the book and caught a glimpse of the beautiful cartoony art, it went on the "buy" pile. 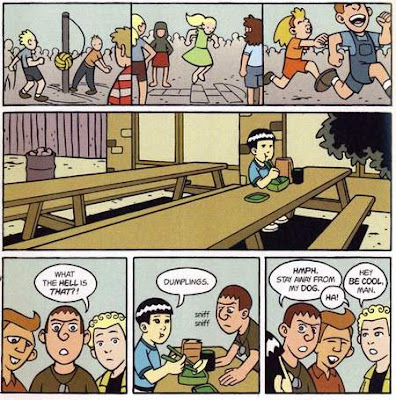 tells three stories of three seemingly unrelated characters in three genres: A slice-of-life biography of a young Chinese-American boy who seeks the heart of a pretty American (i.e. 'white') classmate, a sitcom-styled tale (complete with laugh track) about an all-American teenage boy whose life is ruined by the annual visits of his obnoxious Chinese cousin, and the martial arts fable of the Monkey King, an ambitious ape who masters the twelve disciplines of kung fu in his quest to take his place among the gods. 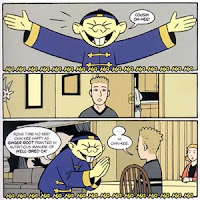 All three tales are essentially about the price we are willing to pay to be accepted, but it is in how Yang ties the stories together that we see how our own self-loathing can affect others. The art in the book is what drew me in. Do-It-All cartoonist Gene Leun Yang is a master of the deadpan cartoon style and cool color palette he employs, which makes it look like a children's book and an avante garde graphic novel at the same time. When I initially grabbed the book, I had no idea what it would be about, But when I flipped through it and saw how Yang depicted the Monkey King's story, which is both cute and violent at the same time, I knew it was worth what I was paying! 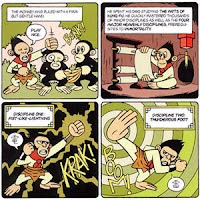 , in that he manages to deliver wisdom without sacrificing entertainment value. He switches genres frequently, with each chapter alternating through the three advancing storylines. There was never a point where I felt confused or lost as a reader. He effectively uses humor to soften the blow of addressing the painful issues associated with self-loathing and racism that make them boring topics when handled by writers of lesser skill.
anyways, American Born Chinese

was published in 2006, and has won tons of awards and accolades, but I never heard of it. So I apologize if you've already read a million reviews and message board posts about it, but if you missed it like me, I think you oughta get your hands on a copy and give it a try! You can order it on Amazon.com by clicking here

Yeah man, I love this book! I peeped it a little while back. I wrote up a little something with some commentary.

BTW, I think this book is PERFECT for young African-American children, well any young kid coping with fitting in.

As much as people try to dismiss the reality of racism, and its effects on us as human beings, it's good to see a story like this coming from someone who isn't black.

although the book's title foregrounds race/ethnicity as the book's subject matter, it seems more subtle somehow than if an African-American had written the same book.

the book is able to really sneak up on you with its poignancy.

(BTW, i really enjoyed the review you wrote, and your Monkey King art!)

I LOVED the 1st one. I'm hyped there's a second one. I'm doing a write-up on this fer sure.

Thanks for the intel, Sir.
Folks think it doesn't happen to Asian or East Indian peoples but it does.
This is a unity builder.

My daughter told me about this book years ago. I felt col to be able to talk about "The Monkey King" with her.

Wonderful review for a wonderful piece of literature and art. I read this graphic novel for a class I am taking now, and I'm so happy my professor assigned it! ABC is thought provoking and fun to read.

Thank you for the great post! It was a pleasure to read.

yeah! great stuff!
I just read another book by this dude called "Animal Crackers" which I really enjoyed, too... I'll write a review of that one soon.